Peacemakers: Crossing the Divide brings a message of hope in the midst of the seemingly intractable conflict between Israeli Jews and Palestinian Arabs. The power of the gospel to transform lives through forgiveness and reconciliation is communicated by powerful personal stories of Jewish and Arab followers of Jesus.

This unique one-hour documentary film, along with an in-depth study guide, speak to deep issues of division in the church worldwide. Ultimately the film is about Jesus’ prayer for his followers:

“May they be brought to complete unity
to let the world know that you sent me…” John 17:23

BUY THE FILM
MEET THE PEACEMAKERS 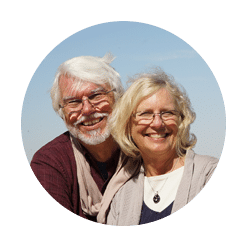 Bob and Kathryn are documentary filmmakers. They have experience in producing documentaries around the world with cultural and faith-based messages. Their latest film, Peacemakers: Crossing the Divide, is the fulfillment of a vision they have carried since the time they first lived in Israel in the 1980’s.

From 2014 to 2017 they moved to Jerusalem to work on the film project. This city which was the birthplace of the Church and a center of early Christianity, is now a focal point for the highly controversial and divisive Israeli-Palestinian conflict. During their years in Jerusalem, Bob and Kathryn spent countless hours researching, praying, and meeting with people of the land.

“We were sitting with followers of Jesus on all sides of the divide who realize that their relationship with each other is more important than the enormous cultural, political and theological issues that divide them. Our desire is to let these people tell their stories — Arab Christians and Messianic Jews who are counting the cost to pursue peace and walk in unity with their brothers and sisters in Christ.” 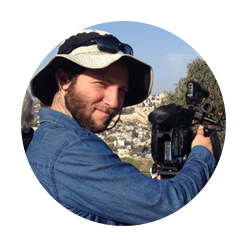 Zvi Landsman is a documentary cinematographer based in Jerusalem. He graduated with honors from the Sam Spiegel Film and Television School. His work includes: The Mute’s House – a Palestinian child and his mother try to get through life in the West Bank city of Hebron. This film was short-listed for the 2017 Oscars. The Watchman – a weekly show about Israel with Erick Stakelbeck on TBN. Trails Angels – about the Israel National Trail.

“Two events show how impactful making this film (Peacemakers: Crossing the Divide) has been for me: When we filmed Jack Sara at his college in Bethlehem, he stood up during lunch and told all the students that I was a Jewish Israeli and that they should welcome me with open arms. This is in an area of the West Bank where Israelis are not allowed to be, for fear of their lives. That was very moving.

Then we heard from Evan (a Messianic Jewish believer we interviewed for the film) that years ago, when he first met Jack (a Palestinian Christian), Jack told him with great anger about how he had been unjustly arrested and physically abused by our troops. Evan told him how sorry he was for what they had done to him, and that he would like to apologize on their behalf. I was moved to hear this too. And I felt how an act of kindness from years ago–a validation and apology given to one person that needed it–rolled through time and found its way to me.

When you live in Israel you sometimes feel there is no hope. The people we’d met in the course of making this film made me feel that where there are hearts of human beings there is always hope.” 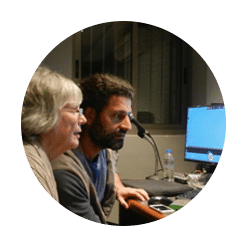 Assaf studied at Hamidrasha School of Art in Israel. He is an editor, director and cinematographer, and has been involved in documentary and fiction films, as well as commercial and TV productions.

“This project is an extraordinary outcome, passionately led by Kathryn and Bob. By being sensitive and at the same time highly professional, Kathryn used her vast experience in the editing room in order to get to this final result. I can’t be more grateful for being a part of it.” 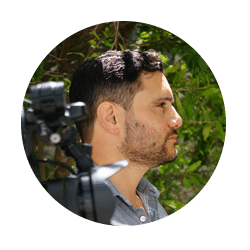 Mati is the manager of Sar-El Media Productions in Jerusalem and leads a team of multi-cultural, multi-lingual professionals. SAR-EL helps to create content for networks, organizations, and clients around the world. As the production manager for Peacemakers: Crossing the Divide, Mati was integral in arranging for crews and other media services needed throughout all phases of the production.

BUY THE FILM
BEHIND THE SCENES GALLERY